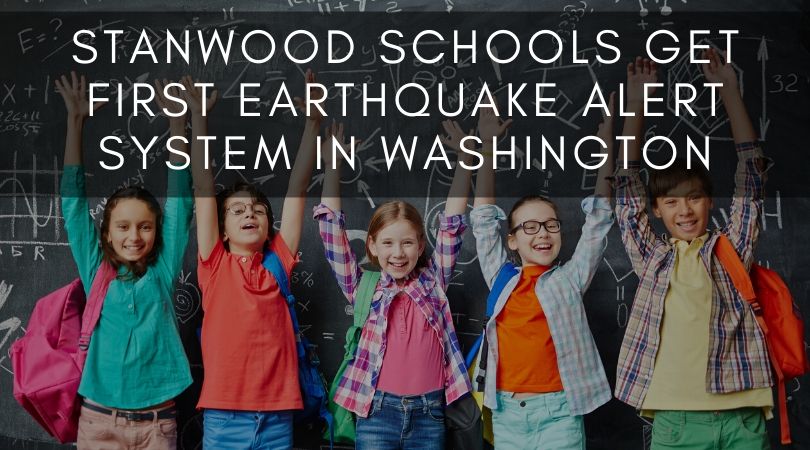 The students and staff at Stanwood elementary located in Stanwood Washington are the first in our state to get a new life-saving technology alert system that offers a warning of up to a minute before an earthquake starts.

Even a few extra seconds could save lives says Stanwood Camano school superintendent Jean Shumate. Last Thursday, students across Washington participated in “the Great Washington Shakeout” and Stanwood was testing the ShakeAlert system installed at this Stanwood elementary school. The project facilitator for the ShakeAlert system says that schools are their first priority. He works for the Pacific Northwest Seismic Network at the University of Washington.

Although this technology cannot predict earthquakes before they happen, it can detect that an earthquake has begun, often times sooner than a human can and can alert people before they feel any shaking at all. This could give students and people up to a minute warning before you actually start feeling the shakes. ShakeAlertoffers a network of more than 1600 seismometers on the West Coast that monitor the location, magnitude, and intensity of an earthquake. When one does strike, these seismic waves travel in all directions and this technology detects primary waves, which travel faster than slower secondary waves. The secondary ways are what actually produce the violent shaking.

The company is looking to have the system available to the public through mobile phones alert in affected regions and is currently being used in California and Oregon. Stanwood Elementary is the first school in Washington to have this technology. ShakeAlert will be installed in all 10 Stanwood/Camano school district buildings at the cost of about $60,000, most garnered from grants the district received.
So why did Stanwood elementary get the first dibs? They were on it early. The school district and the school board were willing to put everything together in order to get the grants needed for this type of technology. The district has been focused on emergency preparedness projects for years.

“A series of sensors detected their seismic waves bouncing off different layers of soil beneath the school. The project builds off Phase 1, which looked at 222 of the state’s school buildings — none in Stanwood — to assess the risk and potential cost of upgrading schools to better withstand earthquakes.” [Source]

I’m so proud of our district and if you’d like more information on the Stanwood-Camano School District, feel free to check out this link or give me a call for all homes for sale on Camano and in this district.